Eloise Hawser’s work might be characterised as ‘sculpture’. She is concerned with three-dimensional objects and, in particular, with the various protocols and processes that must be mastered to make them. She often uses industrial methods, which address specific needs with maximum efficiency, to produce forms that are almost obsessively non-functional and certainly don’t make much common sense. Is there, in fact, something quintessentially ‘English’ about this quiet subversion of rationalism and pragmatism?

Hawser’s works in this exhibition also prompt another question. Do her manufactured objects possess a subjectivity of their own? It is almost as if the thinking she applies to them has made them capable of expressing their own thoughts.

The installation configured around the film Sample and Hold is perhaps her most coherent statement on the self-reflection that some inanimate objects appear capable of. The title is borrowed from the name of the East London company where Hawser’s father was body-scanned, which is the action we see performed in the film. The captured data was used to manufacture a clear acrylic optical lens, following the contour of his stomach and creating a figurative paunch. It is rather dysfunctional as a device for focused viewing, but it does become a synecdoche (‘a part standing for the hole’) of the father figure. The installation is completed with the video Intervolameter, where viewers find themselves persecuted by paparazzi. It is shown behind a custom-made horsehair screen.

In a new installation Hawser allows seemingly arcane objects and images to speak of visibility, a notion often routinely associated with identity and identification. White plastic canisters printed with the logo of a maker of X-ray developer fluid – Velopex – are stacked on the floor of M HKA’s iconic circular space. On the curved wall there is a print of a large truck scanned for its contents: more stacked bottles, a pile of car tires, a suspended bicycle, a standing figure that looks like Venus from Milo. The scan was kindly provided by a company that wishes to remain unnamed, whose representatives Hawser recently met during the Counter Terror Expo at Olympia in London (www.counterterrorexpo.com). (AK) 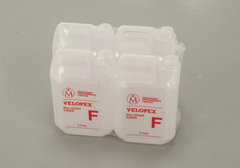