At the core of Ermias Kifleyesus’ practice are the ideas of trace and transience, people and places. For a number of years, the artist has been working on an ongoing project located in the international telephone cabins found in most cities, where people make overseas calls to family and friends. Often frequented by migrants, they are sites for connecting to other places around the globe, reflecting how societies have transformed more rapidly by the flow of people than at any other point in history. Kifleyesus installs folded posters and sheets of paper on the walls and tables within these cabins, which over time become covered in the interactive notations, markings, scribbles and drawings by individuals using them while making calls. The artist visits the cabins on a weekly basis to collect the sheets, which when unfolded are covered in these dynamic traces and markings.

This series of works is the core of Kifleyesus’ socially engaged practice, produced in international telephone cabins around Brussels, Antwerp and Ghent. Many are produced using folded paper posters and advertisements that portray some of the world’s most renowned and photogenic celebrities of western culture. Yet, following their exposure to the daily flow of visitors to the cabin, their images become slowly obliterated, often to the point of unrecognisability. Images of idealised beauty are erased by the build-up from the combined abstract mark-making of many.

THERE IS NO ZEBRA CROSSING IN BERLIN

This mural has been produced in situ at M HKA, covering an entire wall using a technique the artist has developed for transferring images onto different surfaces. Some of the artist’s many works produced in phone cabins are transferred to fabric, which are then transferred directly onto architecture, gradually building up a highly detailed ‘all-over’ composition. This technique of transferral can be seen as emblematic, with visual forms migrating across terrains. (NH) 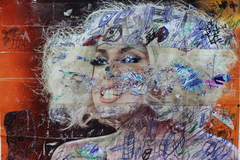