The question of the individual is central to Guan Xiao’s art, particularly the challenges of how one should not only navigate but also harness the logic of time, the speed and influx of technology, the changing understanding of materiality, and the burden of history. The complex and vivid aesthetic of her works in various media, including sculpture and video, could be considered as deliberations on these conditions, where instant knowledge about the world can provide a myriad of inspirations and influences. Looking to represent the artist’s own liminal space as being locally rooted and globally connected, Guan’s highly experimental work functions as an abstraction, formed by synthesising numerous references from across time and geographies.

The video work Cognitive Shape is a meditation on the production of knowledge under the conditions of rapidly developing science and technology, and an over-abundance of information. Guan has collaged together numerous short found video clips, all covering the broad spectrum of her interests, including from YouTube, television and DVDs, along with more narrated video sequences the artist has produced herself. She is also present in the video, performing as herself, describing, in somewhat abstract terms, how she has developed her own world-view through filtering the over-exposure to images and information, and then articulating it as artworks. Accompanied by an ambient soundtrack, also produced by the artist, it displays a calm maturity towards the rapidly changing conditions of life and work.

Merging multiple visual languages to form something graphically vibrant, the sculpture triptych The Documentary: Geocentric Puncture reflects broad changes in how our perception of physical materials and their ‘materiality’ has changed to something more simulated. The work combines sets of artefacts or totems, all displayed in front of large freestanding screens, each possessing a kind of snakeskin camouflage. The deliberate use of overly vivid camouflage occurs regularly in Guan’s works, drawing us closer to readings of surface. These artefacts, some notionally representing renowned historical artefacts – such as an Easter Island Moai statue or an Ancient Egyptian Ouroboros snake biting its own tail – are all positioned alongside camera tripods, signifying firstly our knowledge of them via secondary sources, as well as the boundless idiosyncratic ‘museums’ we can create ourselves from the various means at our disposal. (NH) 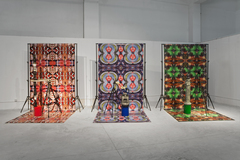