Haegue Yang exemplifies the paradigm shift that has taken place in terms of the intelligence artists are using to redefine questions of identity. Using art as a form of poetic activism, Yang entwines numerous understandings of the notion of identity, from feminist discourses to ideas of migration, social class and displacement. This ‘intersectionality’ describing the relations between experiences, power structures and society, operates in her multi-faceted practice on a formal level of abstraction. Combining numerous items traditionally found within domestic spaces – such as furniture, lights, stands and blinds – different materials, natural and artificial, are encouraged to co-exist. Often the works even adopt some anthropomorphic characteristics, allowing the viewer to take on an implied role in forming subjective relations to works, as well as to each other, via the experiential settings she creates.

VIP’s Union is one of Yang’s formative works. Its premise lies in bringing together chairs and tables borrowed from numerous people who are considered ‘important’ within their own professional fields as well as being connected to the exhibition’s city, in this case, Antwerp. These items, which have travelled from the various domestic or work spaces of their respective owners, form a temporary community in the gallery space, portraying the different stylistic expressions and social conditions of these individuals’ lives, activities and their aspirations. Yang creates a space of collectives and engagements where the traditional distinction between functional design and the art object become obsolete, performed through the generosity of the lenders in agreeing to share their items.

This installation is one of the most recent of numerous works by Yang incorporating venetian blinds, which are perhaps the works she has become most renowned for. The use of the venetian blind, offering experience of obscured vision, has a significant presence in Yang’s practice. She has on occasion discussed the idea of ‘communities of absence’ – communities of people that exist outside of the dominant thrust of society, often living out of sight – which the blinds allegorically serve to address. Blind Curtain – Flesh behind Tricolore has a distinctive ‘inside’ and ‘outside’ in terms of its composition as well as colour, staging a scenario of “organic and skin-coloured inside” and “geometric and primary coloured outside” within the existing architecture. (NH) 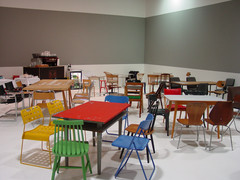