Iman Issa’s practice seeks to pick out experiences of the personal from the collective. Her narrative-based works function through taking stories out of the specificity of a context, and opening them up to the associative potential of the viewer. Combining sculpture, photography, text, sound and video, Issa wishes to privilege the subjective, giving deliberate anonymity to the places, events and characters she portrays, allowing people to bring something personal to these things that seem as though they come from elsewhere. The components of her installations are characteristically both abstract and familiar – an aesthetic facet that forms a sort of democratic offer for producing new narratives.

Material is a series of ten displays, each of which is presented as a study for an alternative form to an existing public monument known by the artist. Each of the displays combines a sentence-long written description of the original monument, along with a model of what its proposed form would potentially look like. In contrast to the concise descriptions that also act as the titles of each display, the models themselves are more abstract in character, playfully reflexive of the traditional forms of identification as well as the changing symbolisms that public monuments have tended to have over time. As is characteristic for Issa’s artworks, her propositions are never determined as being for specific places or people, allowing strong interpretive qualities for the viewer.

The multi-faceted installation Thirty-Three Stories about Reasonable Characters in Familiar Places functions like a book written in three dimensions. It is an installation in three parts – the first containing a book of stories, the second a set of different objects and videos that act as an epilogue to the book, and the third an index on a text panel. The installation provides a set of fragments of experiences, individuals, emotions and locations, but significantly without any key markers of identification for allowing any kind of specificity. It is a set-up suggesting we pursue more complex understandings of place based on our relationship to it, allowing for the incidental, the poetic and the personal. (NH) 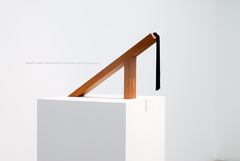 Iman Issa, MATERIAL FOR A SCULPTURE RECALLING THE DESTRUCTION OF A PROMINENT PUBLIC MONUMENT IN THE NAME OF NATIONAL RESISTANCE, 2011 (from the series MATERIAL, 2009–2012), photo: Iman Issa and Rodeo, Istanbul