Juha Pekka Matias Laakkonen’s art aims at a zero-degree of visibility, where a spiritual reward might be expected. Some of his works are meticulous exercises that take place with no one else present and can therefore only be validated by their author. He may choose to let us know about them or he may tell us nothing. Other works yield carefully crafted objects as traces of his action.

WALKING FROM YAKUTSK TO HELSINKI IN 5.3 MILLION STEPS

For this work Laakkonen spent 176 days walking in and around the city of Yakutsk in eastern Siberia. This is also the number of verses in Genesis from the Creation to the Great Flood. The number of steps given in the title would have taken him all the way back to his native Helsinki, but it also referred to the size of Finland’s population. Throughout the entire performance, in temperatures varying from –50° to +40°, Laakkonen wore the same pair of reindeer hide boots, which he had made for himself and which wore out in the process.

Another ‘travel piece’ where all the constituent parts (the hand-made leather case, its wooden handle, the felt and paper wrappings) are put on display, except the objects that have left their imprints on them when the author sat on the stuffed case as he journeyed to the exhibition. The title refers to the kabbalistic notion of reduction or presence-in-absence.

Laakkonen’s new work, still in progress, also began with a journey. He first cut a tree and purchased wool from a farm in almost exclusively Swedish-speaking Korsnäs by the Bothnian Sea. Then he repeated the process in almost exclusively Finnish-speaking Ilomantsi near the border with Russian Karelia. The wood is carved into a traditional standing loom, the wool hand-spun to become the woof of a future weave. Laakkonen will travel the distance between the two settlements to collect smaller batches of wool from different farms, which will become the warp threads, and to find objects to weigh them down. He will fashion the resulting fabric into a garment and wear it as he retraces his steps a third time to return the borrowed objects. The work is based on interaction with the people who live and work along Laakkonen’s route, and on their knowledge of their own land. (AK) 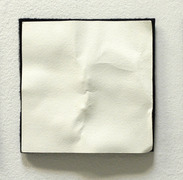 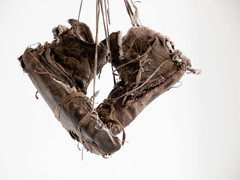