Katja Novitskova speaks of looking at the sky from her window in a high-rise block in a suburb of Tallinn, where the inhabitants felt weighed down by being negatively defined. Like the stars in her telescope, those ‘Russian-speakers’ didn’t quite belong where they had ended up; they no longer appeared to others as what they imagined themselves to be, or perhaps they were not yet what they might still become. Having experienced the politicisation of identity in 1990s Estonia, Novitskova searched for ways out, which were also, inevitably, ways in: academic semiotics, graphic design and the more dubious but also more efficient knowledge acquired by someone who uses the Internet to become an artist.

“Post Internet Survival Guide 2010 is organised into chapters according to the first page of Google search results for ‘survival guide’: SIZE UP THE SITUATION, USE ALL YOUR SENSES, REMEMBER WHERE YOU ARE, VALUE LIVING, IMPROVISE, VANQUISH FEAR AND PANIC, ACT LIKE THE NATIVES, LEARN BASIC SKILLS.” A manifesto as good as any, with the added benefit of being a found object. The book that made Novitskova’s reputation as a sophisticated ‘digital native’ deserves to be taken at face value as a useful introduction to contemporary life.

It would be simplistic to assume that post-internet art (a term her book helped launch) seriously imagines itself occupying the ‘after’ that we also find in the title of this exhibition. Yet Novitskova’s work is marked by a strong interest in the organic and the various realms of nature. For her ongoing series of cut-out sculptures, she first sources images from the Internet and then has them printed and mounted on aluminium.

For M HKA, Novitskova has conceived a new installation of individually titled cut-outs, which she combines with five free-standing sculptures of red ‘diagram arrows’ titled Growth Potentials (stand alone). The deliberate meaninglessness of this ensemble is balanced against the emotional overtones of the imagery – the cute animals – that the industrial production process can never fully eliminate. (AK) 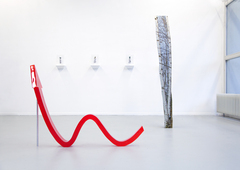 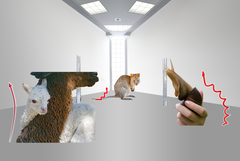