Lawrence Abu Hamdan, who has a background in DIY music, has often re-purposed the format of the radio documentary for the contemporary art context as a form of text–sound composition enlarged with live performance elements and graphic or three-dimensional visualisations. His work connects the fundamentals of how the human body conveys meaning by setting airwaves in motion – tone, voice, words – with the demands and pitfalls of legal systems. His work, much of it made within the framework of the doctoral research at Goldsmiths College in London, helps us re-appraise the precision of speaking, and of remaining silent. Abu Hamdan usually analyses fundamental concepts – the oath, the right to silence, freedom of speech – and demonstrates that the battle for free speech is now about control over the conditions in which we are being heard.

DOUBLE-TAKE: LEADER OF THE SYRIAN REVOLUTION COMMANDING A CHARGE

This new work by Abu Hamdan is a sound piece illustrated by a series of photograph. It centres on a contemporary version of Théodore Géricault’s painting Officer of the Chasseurs Commanding a Charge (1812, in the Louvre) where the artist replaced the French imperial officer with Sultan Basha Al-Atrash (1891–1982), the leader of  the Syrian uprising against the French in 1925–1927. The painting was commissioned by a wealthy businessman from Syria for his British country house. Anglophilia is the unusual reason behind this paradoxical anti-colonial image that uses the aesthetics of the coloniser. The sound piece appropriates a traditional method of storytelling set to music, in which Sultan Basha Al Atrash often features, and together with the photographs the work provokes us to see how colonial violence is represented, celebrated, embodied and appropriated.

Abu Hamdan uses the doubleness of the story told by the paintings (the beginning and end of French imperialism) to understand the ways in which people build a complex and contradictory relationships to their colonial past. The two hundred years separating Géricault’s painting from its perversion are condensed in one moment of double-take, into which a whole history of the colonial project can be read. (AK) 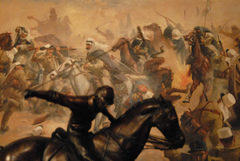 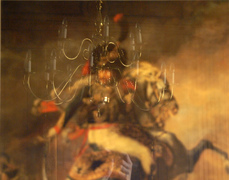