How can classical painting techniques be used to construct a reality that reflects and critiques contemporary society? This is what Maria Safronova sets out to do in her recent series of paintings, accompanied by three-dimensional props. The ‘freedom’ to adapt to norms and routines is a recurrent theme, as is the complacency and even enthusiasm that such socialisation may inspire in the individual. Safronova’s images are hybrids, borrowing features from Russian life today, with its neo-Soviet, neo-imperial tendencies, and from fifteenth and sixteenth century painting in the Low Countries and Italy. Safronova contrasts stylised empty backgrounds with patterned surfaces that enhance the central perspective. Both devices create stages, which she populates with compositions of human figures, based on studies from live models and photographs.

The work consists of series of eleven paintings of routines and activities in a mental hospital, evoking the ‘genre scenes’ of the Dutch and Flemish baroque, a model of the interiors depicted and a text board with the inmates’ daily schedule, from waking at 7am to going to bed at 9pm, and a psychiatric questionnaire that would unsettle anyone’s notion of mental health. “78. If you had to act on stage, would you be able to enter your role so well that you forget it’s a game?”

THE GAME OF THE GENERAL VIEW

This new series illustrates the models for behaviour and social interaction that children must internalise if they are not to be ostracised in kindergarten or at school. It consists of six paintings and four three-dimensional, polychromous ‘situations’ (Storage, Classroom, Building, Playground) displayed in a custom-made cupboard. The title refers to the Nash Equilibrium, named after game theorist John Forbes Nash and describing a set of strategies where ‘players’ can do no better by unilaterally changing their strategies. Safronova writes: “This establishes a standard model of an infinitely repetitive game, the Game of the General View, where coordinating one’s own point of view with others, changing positions or seeking real gain is possible only within the given rules. Stable equilibrium becomes the most beneficial condition, and any change is only for the worse. Imagination and liberation from obstacles become unnecessary.” (AK) 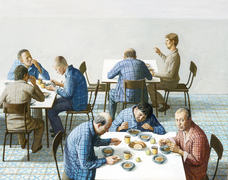 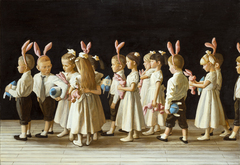