Maria Taniguchi’s point of departure is individual, subjective time – not least for her untitled, black monochrome acrylic paintings on stretched canvas. Their unified visual grid is based on the simplest repeating pattern in masonry. It creates a wall too thin to stand alone, but is often used in modern construction to create the ‘skin’ or ‘face’ of a building. At the same time, the surface of each individual painting visibly disintegrates into patches of irregular shapes and sizes. Echoing the giornate of late medieval fresco painting, they bear witness to the painting process by indicating the limit of one day’s work.

Unlike the Italian masters, who had to plaster a segment of wall in the morning and finish painting it by evening, Taniguchi makes no effort to efface these borderlines and absorb them into the overall composition. Her composition is these visualised differences between the various dimensions of time where she herself lives and works. She admits only the variation caused by the working process as such: the variable ratio of pigment to medium, atmospheric conditions that influence drying time, the occasional external disturbance (for instance when a dog rests for hours on the tautly stretched canvas). There is no real contradiction between masonry as a unit for measuring work-time and as a reminder that we are encountering a constructed space, in the most straightforward sense possible. The restriction of the grid helps us appreciate the freedom that even minimal variations of touch and tone lend to any chosen format.

In her videos Taniguchi also portrays processes of making and seeing, but this format allows her to be a curious bystander rather than reporting from inside her own laboratory. Making the part stands for the whole can be done more explicitly when someone or something else is in front of the camera. For instance a body part, as in the video installation Untitled (Dawn’s Arms), which shows a stone-carver in the Philippine marble quarries on the island of Romblon replicating the arms of the statue (titled Morning) that mirrors itself in the stagnant fountain of Ludwig Mies van der Rohe’s Barcelona Pavilion. (AK) 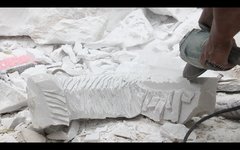 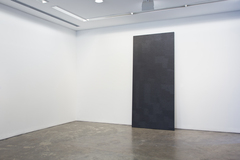