Much of Massimo Grimaldi’s artistic practice holds up a mirror to the economies in place for producing and circulating images in western mass media, particularly towards our mediated relationship to foreign, underprivileged, ‘other’ cultures. It engages directly in sanctioned activities that intervene in the lives of victims of crisis and exploitation in places such as sub-Saharan Africa, Cambodia and Afghanistan, looking to foreground the usually suppressed ethics of such intervention, as well as of so-called ‘poverty journalism’. Whilst considering the role of artists and the limitations of art, Grimaldi has invented a possibility for art to have a profound effect on people’s lives.

Grimaldi regularly collaborates with Emergency, an independent, neutral NGO that was founded in Italy in 1994 to offer free, high-quality medical and surgical assistance to the civilian victims of wars, landmines, and poverty. On several occasions, Grimaldi has proposed projects to public institutions and private collectors that were based on donating the funding involved in an art project towards supporting Emergency’s healthcare facilities. This activity then becomes the subject of photographic essays for display as slideshows in gallery spaces, documenting the patients being rehabilitated by Emergency, and exhibited on the newest model of Apple computer available at the time. These image-reportages, which portray their subjects very much in the high resolution of advertising media, are displayed as synchronised slideshows across sets of Macs, creating a contrast between the computers with their stylised images and the social reality of the geographic locations where the works begin. (NH) 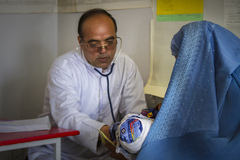 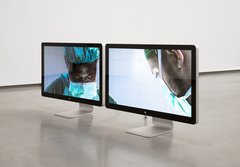