Oscar Murillo’s practice mobilises painting, sculpture, installation, video, and situation-specific events, to explore notions of making – as a practice, as a form of both work and leisure, and as a means of living within and beyond aesthetics. Informed although not limited by the biographical, Murillo explores the circulation of labouring bodies, material resources and capital across geographies and systems of value, drawing attention to the tangible traces that result from acts of work and exchange. Reflecting on a cultural metropolis such as London and the processes of movement and migration that such places have come to be defined by, Murillo’s works often function as repositories of time harvested and spent, generating indexical objects that bear witness to their own production and displacement. One of the dynamic generation of artists living in the UK, Murillo has a human approach to art-making, its subjectivity possessing the intelligence to be interrogated and redefined.

Murillo has developed a new project for M HKA that approaches the exhibition space as a production site for a functioning factory of ceramic coconuts, like those often found in places such as Columbia and Mexico. From a family of factory workers, he, and occasionally his father, will occupy this space, initially to set-up the factory, and then to run it on occasional days throughout the duration of the exhibition. In turning part of the museum into an operational production space, Murillo opens up questions of labour and globalisation, as well as more relational subjects of community and family, whereas the ceramic coconuts comment on the marketability of ‘exotic’ cultural identities.

Murillo has been in residence at Air Antwerp – the city’s international artist residency programme – where he spent a month to develop his work. (NH) 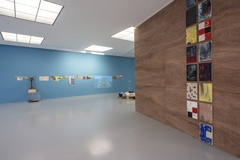 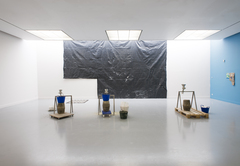