Patrizio Di Massimo first made a name for himself with work in various media (video, performance, drawing) commenting on politically charged topics, such as the legacy of Italian colonialism in Africa. For the last couple of years he has been revisiting the history of figurative painting and reinventing a form of surrealism for today’s viewer. This is an experimental practice requiring visual risk-taking, unprejudiced curiosity for things that tell stories and active disobedience towards the dictatorship of good taste. Di Massimo’s recent work eroticises the decorative object, as a three-dimensional prop or as the subject matter for paintings, videos or performances. Sometimes his objects literally come to life, thanks to surreptitious stagecraft.

The various paintings, drawings and objects of the series The Lustful Turk are all based on an English erotic novel from 1828 that is a well-known example of Orientalism, Europe’s proactive ‘othering’ of the people it was about to colonise. Three large paintings are presented here, on a wallpaper displaying four visual emblems that Di Massimo developed to depict the somewhat repetitive physical activities described in the novel. Like the wallpaper, The Lustful Turk (Haberdashery) suggests that cushions and tassels and candles and clouds might stand in for certain body parts, whereas The Lustful Turk (Bang Bang) introduces African sculptures as an additional ‘exotic’ layer and The Lustful Turk (Salon) offers a retrospective view of some previous paintings in this series.

This family portrait in three parts was first shown at Kunsthalle Lissabon in Lisbon, which it co-produced with M HKA. All three installations contain something alive, contrasting with crafted soft objects that unambiguously refer to Di Massimo’s own family members. They have all been assigned the ‘M’ in celebration of the first person singular accusative (and of Mum’s appearance as a resplendent red oversized tassel). There is a live canary bird in the cage next to the bolsters that have collapsed in a mikado-like formation on the floor, embodying Dad. The denim cushions look like those in Sister’s bedroom in the family house. There is a secret space inside the pile where a female performer can crouch and poke her extremities out through the tassels and fringes. (AK) 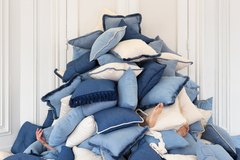 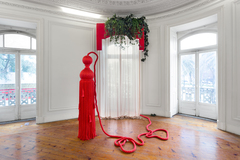 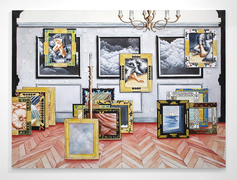