What kind of identity can an artist make for himself in an ocean of readily available data? In conditions of information overload he may become either a hoarder (assembling libraries without reading the books) or a hermit (withdrawing into his own body and mind). Barateiro navigates these two extremes with necessary precision. The real difficulty is to admit references to the outside world in your practice without letting them interfere with your inner compass.

During the forum Just Who Do You Think You Are? at Cinema Zuid on 14 June, Barateiro screens the film We Belong to Other People When We Are Outside (2013). It juxtaposes a text read by a male and a female actor with images of modern and contemporary artworks that Barateiro has been collecting for some time, splitting a consciousness into at least two speaking characters. This film is a work of navigation: between different visions of authorship and different readings of subjectivity.

Objects and images as subjects. That is something Barateiro addresses in his other works – lecture performances, artist books, installations, paintings and drawings – and not least in this animated film, based on a recent series of drawings in Indian ink on white paper. Technically, the animation consists of making these drawings twirl in and out of view. But the film also animates the purposely flat images of cartoonish ‘backgrounds’, ‘clowns’ or ‘pizzas’ into scenarios or characters that take on a real agency. When we watch them dance, we see them act.

This beastly figure is based on a similar one made by the Luena tribes of Dundo in what is now north-eastern Angola. The original is kept in the Museum of Dundo, built by Portugal’s colonial National Diamonds Company in 1936. The work and its title reflect two of the roles Barateiro plays as an artist: that of the connoisseur (of art history and contemporary mass culture) and that of the commentator (of colonial histories and current politics). The word curfew is an English corruption of the French couvre-feu, ‘cover your fire’. It is a moment of enforced quiet in an imposed state of exception, such as the austerity politics that Portuguese society is now being subjected to. The half-animal, with its intense gaze, represents a short-circuiting of what we think we are seeing. (AK) 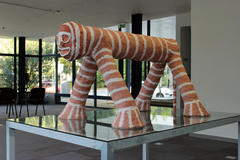